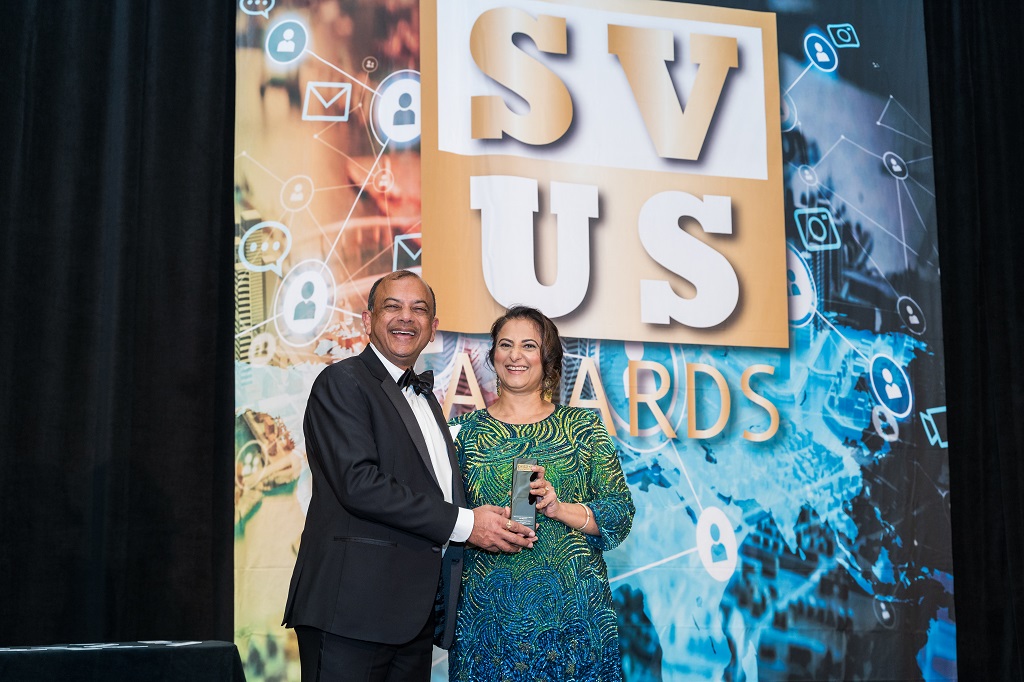 COO Gita Bhargava won gold at the SVUS Women World Awards® in the Female Entrepreneur of the Year, USA category. The coveted annual Women World Awards program encompasses the world’s best in leadership, innovation, organizational performance, new products and services, and milestones from every major industry in the world.

While accepting her award at the glittering event in San Francisco, Gita stated: “I want to ask all female entrepreneurs to believe in yourself, use the power of positive thinking, and think big! You will be able to achieve anything you want.”

CEO Ragu Bhargava won a silver at the SVUS CEO World Awards® in the CEO of the Year, Business Services category. Judges from a broad spectrum of industry voices from around the world participated and their average scores determined the 2019 award winners.

Ragu states: “Thanks for this recognition, I am honored. But mostly thanks to my Team that has helped me get here. The Team that is dedicated day and night to keeping us at the top. My advice to others looking to succeed, be passionate about your work.”

About Ragu and Gita Bhargava

An award-winning financial executive and entrepreneur, Ragu has also won the Pride of India Award and Le Fonti Award for his leadership. In his previous avatars, Ragu was the Chief Financial Officer at ActivIdentity (ACTI) and held leadership positions in several companies including Deloitte and NetIQ (NTIQ). At NetIQ, he played a key role in helping the company grow from $20 million to over $300 million in revenue. He is an avid supporter and Board member of City Year San Jose/Silicon Valley (www.cityyear.org/sanjose), an education-focused nonprofit organization helping at risk students across America stay in school. He is also an advisor on the Western Governors University College of Business Council.

Gita has a 20+ year track record of operational excellence and innovative problem solving and has received various recognitions for her work including Stevie Awards, Le Fonti Awards, and Silicon Valley Business Journal’s Women of Influence Awards.

This article was originally published on BusinessWire.

to get the latest news and insights on global PEO Services, Payroll, HR Technology and Workforce management
Subscribe